With so many styles of Antique furniture out there, it can often be hard for the untrained eye to identify a particular period or design. This article aims to provide you with some simple tips and tricks on how to tell if you have a piece from the Victorian era (1837-1901), and what to look for when trying to spot common features of Victorian furniture. 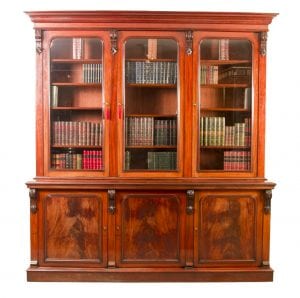 A Victorian Mahogany bookcase with Flamed Mahogany paneling to the doors.

Compared to Georgian Furniture of the 18th Century, which was predominantly made from Oak or Mahogany, Victorian design heavily featured the use of Walnut and Flamed Mahogany to give a more decorative finish. Walnut was utilised mostly for smaller pieces such as Arm Chairs or Nursing Chairs, Hall and Console Tables, and Occasional Tables to name a few. Mahogany was typically used for bigger pieces of furniture, for instance, Chests of Drawers, Bookcases, Sideboards and Dining Tables. Often Flame Mahogany veneers were then applied to these pieces to give a grand appearance. Walnut or Mahogany was used in its solid form for crafting chairs, as the frames were impossible to apply veneer to. However, highly decorative Walnut and Rosewood were also used to compliment smaller table tops and surfaces. 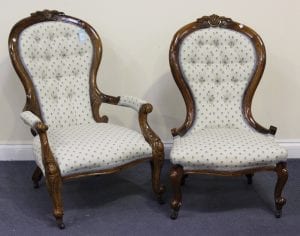 A Walnut Victorian spoon back armchair alongside a matching nursing chair

There are three easily identifiable common styles of chair associated with the Victorian period. The first being the Spoon Back Arm chair, given its name simply for its spoon-like back. Unlike the chairs of the Edwardian era which often have a more square back rest, Victorian Chairs were a lot more curvaceous in design. The Spoon Back arm chair will have either a buttoned or plain upholstered back rest with scrolled arms and toes, with carvings to the legs which were more than likely cabriole in appearance. The next typically Victorian chair is the Nursing chair. Much like the Spoon Back, it has the same style of backrest but doesn’t include arms, and is much lower in stature, getting its name from being used to cradle or feed a newborn during this era. 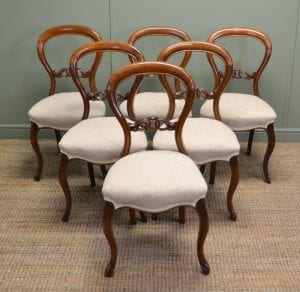 A set of Victorian Mahogany Balloon back dining chairs

The last example is the Balloon back chair. This chairs primary use was as a dining or occasional chair, and is easily recognised for its open circular backrest, much like a balloon in shape. Unlike the Spoon Back and Nursing chair, only the base of the Balloon back was generally upholstered, with arm chairs in this design usually being reserved for the head of a grand dining table. 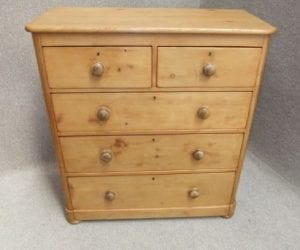 A Victorian Pine chest of drawers. Note the rounded edges and corners, complete with turned knob drawer pulls to match.

Of all the pieces commonly associated with the Victorian period, Chests of Drawers are without a doubt one of the most easily spotted pieces of furniture. Most chests were either Bow fronted (out swept curving front) or were simple square fronted chests with rounded corners and edges. These pieces were regularly produced in Mahogany and / or finished with flame mahogany veneers, although less grand examples can be found in Pine, with Mahogany remaining the common wood of choice. Victorian Chests of Drawers were either raised upon shaped block feet or turned bun feet, and were fitted with turned ‘knob’ drawer pulls. Metal swing handles were something commonly associated with the Georgian periods of the late 18th and early 19th centuries, so if these handles are applied to a chest of drawers then they have either been replaced or the chest is not Victorian. 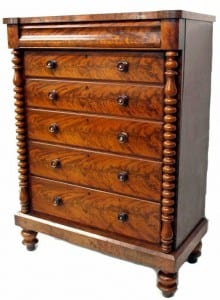 A beautiful example of a Victorian Scottish chest in Flamed Mahogany.

A more uncommon antique Victorian chest would be the Scottish chest, deriving from its name sake, Scotland. The Scottish chest is taller than traditional Victorian pieces and often has curved and shaped drawers towards the top. This type of chest frequently included carved wooden mountings to the sides and base, something which wasn’t associated with other chests of drawers of this time. 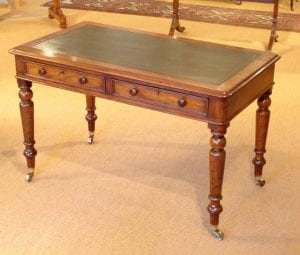 Unlike Victorian chairs and Chests of Drawers, Tables can be a little harder to identify due to a larger range of designs, although there are still some obvious clues to look out for. Victorian Tables did feature a wider range of woods, often dictated by their intended purposes. For instance, washstands would be crafted from Oak or Pine as these woods were better suited against water. Console and Hall tables, along with writing desks used Mahogany as it was more elegant, and also disguised any small marks or wear. Satinwood was also utilised by the Victorians as well as the Edwardian’s, due to its hard wearing nature and decorative appearance, although was a lot more uncommon amongst Victorian furniture. As centre tables and games tables were often found in more wealthy homes, these pieces used only the finest woods available. They were intended to impress guests in the home and were typically finished in Walnut, Rosewood or sometimes Amboyna, a wood deriving from Indonesia. In comparison, these types of table were in most cases raised upon heavily carved supports terminating in swept feet. 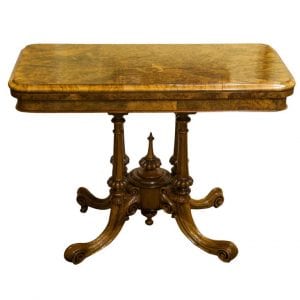 An example of a stunning Victorian card table. Note the very decorative carved Mahogany base and a Burr Walnut finish to the top surface.

This is something very distinctive to Victorian furniture, as Georgian and Edwardian furniture was usually raised upon more simple slender supports. Once more, the Victorians also took inspiration from France and Asia, providing some truly unique pieces. In most cases, Victorian Tables with drawers had the standard ring turned knob drawer pulls, with rounded corners and edges, much like the chests of drawers.

Although not going in to great detail on how to recognise all aspects of Victorian furniture, I hope this has provided you with some simple and useful ideas on how to spot the more common designs of Victorian antique furniture.