A Leg says a lot!

To the untrained eye, it is hard to know how old a piece of antique furniture is or from what period in history it may have come from. A common area to look at when identifying a piece of furniture is to look at the legs the piece sits upon. This may sound odd, however the shapes and styles of legs changed vastly throughout the history of furniture design, and then say a lot about the age or period of the item.

Legs come in all shapes and sizes. For instance, Victorian furniture commonly uses short and stubby ring turned, carved legs / feet for Chests of Drawers and Chairs. Compare this to the Edwardian period which proceeded it, which commonly uses a mixture of Cabriole and Tapering legs for Display Cabinets and Writing Tables. Below is a brief description on the common types of legs that you are likely to find among today’s Antiques. 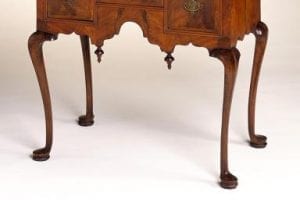 Cabriole legs are undoubtedly one of the most commonly used styles of leg, often found in a wide range of furniture spanning over the last couple of centuries. The name refers to an out swept knee leading down towards an inward swept ankle, and often terminates with an ornately carved or turned ‘pad’ foot depending on the style of the piece. The design originates from the Queen Anne period of the early to mid 18th Century that begun a shift towards elegance, although this Queen Anne period was again heavily replicated throughout the Edwardian to mid 20th Century period. The Cabriole leg can vary in height and length depending on the piece that sits upon it. Side and Console Tables, Display Cabinets, Chests on Stands, Lowboys and Dining Chairs all feature long elegant legs which signify the Queen Anne style. Compare this to early 20th Century and sometimes Art Deco pieces which often feature a much shorter Cabriole leg which can be found on Chests of Drawers or Bedside Cabinets. A common wood for the Cabriole leg is Walnut, with later reproductions being in Mahogany or even Oak. 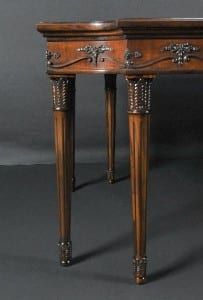 The Fluted leg describes a leg which is often long and sometimes very slightly tapered, featuring a series of grooves carved vertically at regular intervals along the length of it. The design usually terminates in a simple turned toe, either left plain or capped with a Gilt metal toe depending on the piece of furniture. This style is common in pieces of the Neoclassical influence which replicated design from Ancient Greece and Rome. It originated in the last half of 18th Century, although the style was again produced throughout 19th Century period in England and Europe. Although It is common to associate this style generally, with French or Scandinavian furniture. Unlike the Cabriole leg, the Fluted design is not something often found in the last century, so usually this would date most pieces to be pre 1900’s. The style can be found usually on pieces such as Console and Hall Tables, Dining and Tub Chairs, as well as Occasional furniture such as Side and Lamp tables. The Fluted leg was often produced using Mahogany, however depending on origin, the legs were either Ebonised (English), Gilded (French) or Painted (Scandinavian). 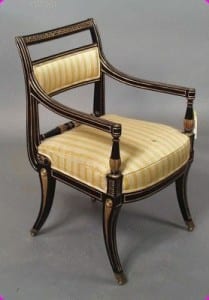 An English Regency Dining Chair featuring four Sabre legs. Note that the chair is Ebonised and highlighted with Gilt detail.

Found in designs from as long ago as before the Middle Ages, the Sabre leg has a long history compared to other designs, although did not become prominent until the 18th Century with master Cabinet Maker Thomas Sheraton (1751-1806), who adopted this style amongst his work. The Sabre design was used heavily in the English Regency period (1811-1820), and the Empire period of the early 19th Century by the French. The leg can be identified by its flared out concave shape, much to that of Sabre Sword, hence where the design gets its name. The leg is often square or rounded at the edges. Unlike the other styles, Sabre is very limited to being used on Dining and Arm chairs, and does not commonly feature on other types of furniture in this form. The Empire and Regency styles did however use a variation of the design for other pieces, often being much shorter when used on Chests of Drawers or Centre Tables. These adaptations were usually adorned with Gilt Metal and Ormolu decorative mountings. Traditionally the Sabre leg is found in Mahogany, although like the Fluted leg it can be Ebonised, Carved or Decorated depending on origin. There is an abundance of reproduction furniture that can be found today featuring the Sabre design, more often than not Chairs for Dining Table sets produced mainly in the 1980’s and 90’s.

How to tell if it’s an Antique or Reproduction leg

So how can you tell if the leg on your piece of furniture signifies an Antique or a Reproduction? Well the obvious thing to look at would be the wear to the leg. An Antique piece will always feature wear and a natural Patina, since this area is often the subject of general wear and marks.

Does the leg appear to be to pristine and shiny? Over time the original lacquer or finish will fade or craze with age, if it appears to be very bright and emitting an unnatural shine then it is most likely a reproduction.

But what if the legs are aged and I still can’t tell? There are still a few obvious signs to look out for here. Legs were traditionally attached to pieces before the 20th Century using dowels, or were even carved as one with the piece. Furniture after the Edwardian period used mainly screws or blocked sections which were glued to give a secure fit.

I hope this blog post has shed a little light on how to date a piece of furniture just by looking at the legs on which it sits upon, and hopefully next time you see a piece that you like you will know what to look for and whether or not it’s the real deal!