In comparison to English furniture design, French furniture is often more over the top and highly decorated in comparison, using the finest exotic veneers and mounting furniture with Ormolu (Gilt metal) plaques, is just some of the characteristics that set these two styles widely apart. This article talks briefly about popular pieces that are unique to French furniture design, what makes them different from other traditional styles and how their design can be easily identified. 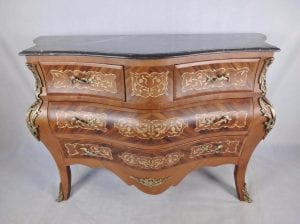 An example of a Reproduction French Bombe Commode Chest. Note the bulging sides and front, heavily decorated with inlay. This particular chest is fitted with a Black marble top.

‘Bombe Commode’ is the typical name used to refer to a Chest of Drawers, or Bedside Chest in the French taste. The design originates from 17th Century France during the Louis XV reign, with the style remaining ever popular up until the present day. The word ‘Bombe’ is used to signify a bulging or outward curved surface at the front and sides, with the French word ‘Commode’ meaning ‘Suitable’ or ‘Convenient’. Bombe Commodes can be used for many different rooms within the home such as the bedroom, dining room and living room. However due to their often highly decorated nature, they are popular within hallways and entrances replacing console tables, as they are also a very practical piece of storage. They differ in size depending on their use, with smaller Bombe Commodes coming in pairs for use as Bedside Chests or Occasional Tables. Bombe Commode Chests are often produced using Mahogany or Kingwood, and can sometimes have a lacquered or natural finish. They usually feature an element of satinwood or marquetry inlay, with some pieces having hand painted detail or scenes, known as the ‘Vernis Martin’ style, in reference to a style of furniture painting. The majority of commode chests are fitted with decorative Gilt metal handles, with more elaborate pieces having Ormolu mounted Knees and Toes. Top surfaces can also vary in style with a shaped wooden inlaid top or a thick piece of cut marble to compliment the design below. 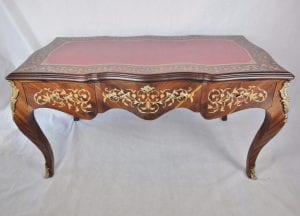 A Bureau Du Plat with Red Leather inset writing surface. Note the decorative inlay to the top and drawer fronts. This desk also features the typical Ormolu mounts to the knees and toes.

A ‘Bureau Du Plat’ is the French term for a writing desk which translates loosely to ‘Flat Desk’ in English. They are often very grand in design, and are larger and more elongated than that of a typical Antique Georgian or Edwardian English writing desk. Much like the Bombe Commode above, Bureau Du Plats are often highly decorated and constructed using the same materials, first gaining prominence in 17th Century France. Unlike the Commode Chest, the Writing Desk is not usually finished with any painted detail and usually features an inset leather writing surface, as not to damage the surrounding area. Ormolu mounts are predominately used to enhance the supports of the desks which are commonly raised upon elegant Cabriole supports. Bureau Du Plats also commonly feature lockable drawers for storing papers or personal belongings, and due to their size, act as an alternative to a traditional Georgian Style pedestal desk for office use. 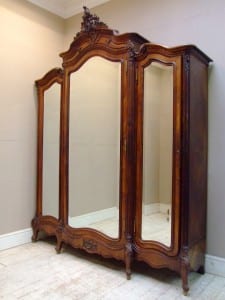 A beautiful example of a typical French Walnut Armoire. Note the carved cornice to the top, followed by smaller carvings to the sides.

An Armoire is a French style of Wardrobe. What sets it apart from that of any other Wardrobe is that it is very ornate compared to others, and is often raised upon small supports, usually short cabriole legs. Armoires are typically produced from Oak, Mahogany or Walnut using solid wood rather than Veneer due to their size. They feature a more classical Antique style as they are often associated with Antique French Country furniture, and are more subtle in design than other French reproduction pieces. They can be finished in a natural wax or lacquer, with newer reproductions often painted to suit a bedroom theme. Armoires primarily feature a carved and decorative cornice to the top, terminating in a finial or crest, with further carved detail to either the doors or drawers (if present) below. The Armoire can feature up to four or more doors depending on the scale, and either come with a solid or mirrored door. 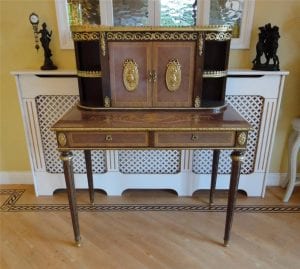 The ‘Bonheur Du Jour’ translating to ‘Daytime Delight’ is a style of French desk often referred to in English as a ‘Ladies Desk’ due to its small stature. The design originates from Paris in 1760, but by 1770 had become a prominent fixture throughout wealthy homes in France, as it was versatile and elegant. That same year the design had reached England where it was adapted to the Georgian taste, being somewhat toned down, produced with dark Mahogany and subtle decoration. The French designs, much like with the Bureau Du Plat, are usually highly decorated with Ormolu mounts, and use Kingwood or Mahogany for its construction with a range of decorative inlays. Due to their small size, the ladies writing desk is more popular with people looking for the practicality of a desk but with limited space, and because of this is often used in Living Rooms, Hallways, Dining Rooms, Offices or Reading Rooms. The desk is typically characterised by its raised upstand to the back, which often features a series of pidgeon holes and small drawers, to store belongings and papers. These small super structures are also highly decorated, complete with a gilt metal gallery around the top edges.

I hope this post has enlightened you on the unique furniture that has originated from France, and how furniture with the same practical uses can differ depending on origin. French furniture design is without a doubt one of the grandest and lavish styles ever. It can add a focal point in any home, whether it be with Bombe Commode Chests of Drawers in the Bedroom or Hallway, or a stunning Bureau Du Plat writing desk in the home office or reading room, a touch of French class can go a long way.