Chairs are a fundamental piece of furniture in any home or public place, it is no surprise that many shapes and sizes exist. Through the centuries, various designs of chair have stood the test of time and carried forth in to the next period, with many of these popular styles still being replicated today by cabinet makers and home interior companies. This article talks about common antique chair design, and how you can easily identify them by style, starting from the 17th Century right up to the early 20th Century. 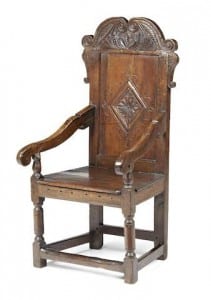 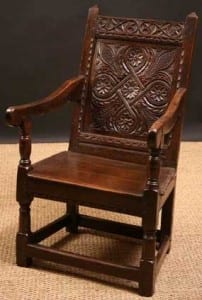 This example of another arm chair from the period has had later decorative carvings added to the back rest.

In comparison to later styles, 17th century chair design was basic, with pieces usually being produced in Oak. This was due to other woods not being readily available in Britain, nor discovered overseas. The common style to associate with this period was undoubtedly the open armchair. These chairs also didn’t typically feature upholstery, as this was something reserved for only the wealthiest of people, so upholstered chairs from this period are either vary rare or have been later added to. Key things to spot when looking for a genuine 17th century chair is a squared backrest, a set of four square or turned legs with four stretchers in between, and often either straight or slightly curved arm rests. Decoration was also typically added to the back rest in the form of simple carvings, however it was common for arm chairs from this period to be later embellished in the 19th Century by the more elaborate Georgians and Victorians. The style of the 17th century arm chair has been widely copied, particularly in the Edwardian era and early 20th century. This is partly due to many examples not surviving, so finding an original in the present day may be challenging, considering early pieces are now over 400 years old. 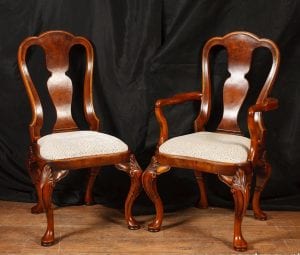 The Queen Anne period of the early 18th century marked a huge shift in design in Britain, which was now influenced by the Baroque architecture of continental Europe. This new influence changed furniture design and incorporated new materials such as Walnut and Mahogany. Open arm chairs from this period are very easy to identify due to their iconic carvings and elegant shape. Called simply the ‘Queen Anne Chair’, the top rail is shaped to that of ‘cupids bow’, with the seat back being a carved solid splat, which refers to an open back rest with a central carved wooden support. Unlike chairs of the 17th century, the Queen Anne chair usually had an upholstered seat base. The chairs were also raised upon long carved cabriole legs with carving detail to the knees and toes. This style transferred to other pieces of the period such as chest of drawers or chests on stands, which are also raised upon similar legs and produced predominately in Walnut or Mahogany. The Queen Anne style was still being applied to furniture and architecture up to the mid 18th century, long after the Queens reign. The Queen Anne style enjoyed a long revival beginning in the late Victorian era, lasting right through till the 1930s. Today many dining tables, arm chairs and chests of drawers can still be found in this style, and due to its elegant nature, it can fit in to most homes. Although Antique furniture in the Queen Anne style from the 19th century still exists today, original early 18th century pieces are highly sort after with prices being well in to the £1000s for a single arm chair. 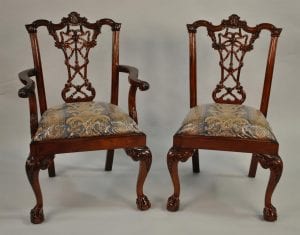 George Hepplewhite and Thomas Chippendale were both respected cabinet makers in the 18th century, and are classed as two of the ‘big three’ furniture makers of this period, a long side Thomas Sheraton. They are all still highly regarded to this day, with many designs of their furniture carrying through the centuries to the present day. Thomas Chippendale produced a wide range of commissioned furniture such as bookcases, desks and display cabinets, for large stately homes such as Petworth House in Sussex, and Harewood House in Yorkshire. Many of these original pieces can still be seen today, preserved in their original setting. Unlike Chippendale, little is known about George Hepplewhite, with no known evidence of his original work still existing. However, both cabinet makers share timeless designs of chair, that would go on to be reproduced countless times. There styles built upon the existing Queen Anne design, keeping and open seat back. What made their respected designs unique were open fretwork carvings, rather than the 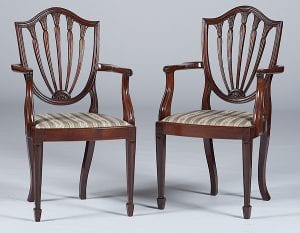 A pair of Hepplewhite style arm chairs. Note the iconic shield like back rest, something very different to the previous Queen Anne design.

central solid splat back rest. Both Chippendale and Hepplewhite produced their own versions of chair, although similarities between the two are noticeably recognised. The Chippendale chair still incorporated the central back rest but made it more elaborate, making it openly carved and more curvaceous. The Hepplewhite chair took this further by incorporating an expansive shield or balloon shaped back, with delicate carved detail applied. Both designers produced their iconic chairs in Mahogany, with either square, cabriole or tapering legs and upholstery to the seat base only. Some chairs were produced without arms and some with, the arms being delicate and scrolled to the fronts if present. This also goes for stretchers to the base, with armchairs seemingly made without stretchers and ones without arms having four stretchers applied to the base.

As well as pieces of Hepplewhite being non existent today, Chippendale furniture is extremely rare in the public market, and often preserved in galleries, museums and manor houses where they were originally commissioned. Because of this, reproductions have been made from as early as the late 1700s up to the present day. Modern reproductions of these styles are fairly inexpensive, having been mass produced with the development of machines and tooling. 18th century copies on the other hand, are still rare and will fetch in excess of a four figure sum for a pair. An older reproduction is noticeable due to its delicate carvings and small imperfections. Compare this to a modern piece which will feature crisp uniformed carvings, and evidence of saw marks.

Hopefully this article has given you an insight on how today’s designer chairs have evolved since the 17th century, up to the mid and late 1800s. My next article will continue on from this and portray chair designs of the Georgian, Regency and Early Victorian periods.