Continuing on from Part 1 and 2 of Iconic Antique Chair Design, I will be moving on from the late Georgian period of the early 19th century and begin with antique chairs from the Victorian era, followed by the Edwardian era and finishing with the Art Deco design from the 1930s.

The Spoon Back Chair 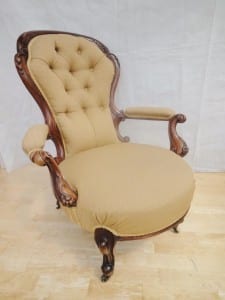 With the Victorian period (1837-1901), came the use of industrial machinery to produce a whole range of general goods for day to day use. Furniture was now able to be produced in much large quantity and as a result became more widely affordable. Although many styles of chair can be attributed to the Victorian era, in my opinion the Spoon Back chair undoubtedly represents an iconic antique chair design from this period. It is easily identifiable, easy to source today, and came in a range of styles and variations, thus making it one of the most popular styles of its day.

It is hard to pinpoint and exact date of first manufacture of the Spoon Back chair, however it originated in England and was popular from the early to mid-Victorian period, later falling out of fashion to other designs of chair in the late 19th century. The Spoon Back chair can typically be identified by its ‘Spoon’ shaped backrest which was often upholstered and sometimes buttoned. The iconic Spoon Backed shape was either incorporated on to an arm chair or low Nursing chair. The Nursing chair predominantly features this style of backrest, and it is unusual to see find one without the Spoon back. 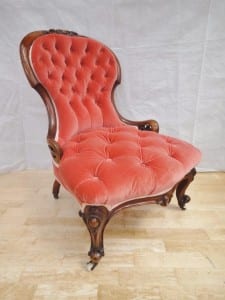 A Victorian Spoon Back Nursing chair. Note the low seat height and lack of arms.

The design was highly popular amongst Victorians as it was elegant yet comfortable. All antique Spoon back chairs were commonly carved out of Walnut, Rosewood or Mahogany, with the latter often being the more common material. The higher quality chairs would feature more profuse carvings, with crests to the top of the back rest, and scrolled arms or heavily carved legs, often depicting a form of foliage. Upholstery again varied, depending on the quality, with simple cotton or woolen coverings, right up to elaborate needlework patterns.

Today the Spoon Back arm chairs and Nursing chair remain popular, as they add a touch of class to the corner of any room. As stated before, the Victorians incorporated machinery in to furniture production, making the scale of production far greater than periods before it. This means that many examples of Antique Victorian chair, such as the Spoon Back, can easily be found today for between £50-£400 depending on quality and condition. Unlike other antique chairs however, the Victorian Spoon Back chair hasn’t been as widely reproduced, and reproduction chairs can be hard to find, particularly good quality examples. Reproductions from the 1980’s – 1990’s can be found, although they are often very naively carved and lack any real quality. 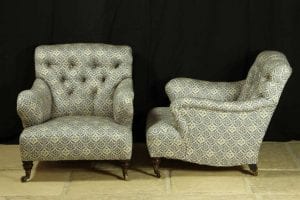 A typical Howard & Sons easy chair. The low but deep seat, with sweeping arms, made this design iconic.

The ‘Howard Chair’ refers to an iconic design of easy chair produced by master English cabinet makers ‘Howard & Sons’. The style, or various forms of it, were produced from the mid Victorian period, to the early 20th century. Although Howard & Sons began trading as early as 1820, and produced various types of furniture, including Desk, Console Tables and Chests of Drawers, their everlasting chair design it was makes them so well known today.

The Howard name is not something commonly known to the general public, but rather antique enthusiasts, dealers and industry professionals. What makes their arm chair truly iconic is that the shape was totally unique for its time, being fully upholstered unlike other styles of the period. The design was also the first to incorporate springs in to the seat base, with the company patenting their design in 1865, making it exclusive to the brand. The Howard style is easily identified by a low but deep seat base, with long sweeping arms and small legs raised upon castors. This shape was also used by Howard & Sons in designing sofas and settees.

Due to the popularity of the design, it inevitably spawned many copies by other furniture makers, right through till the Edwardian period (1901-1910). These copies often mimicked the original design, making it hard to differentiate between the two. However, original Howard chairs can be recognised in a number of ways. The company always stamped or added their name to their pieces. On chairs, this can simply be with a series of numbers and / or the makers name and details stamped in to one of the rear legs. The same information can instead, also be found on one of the castors. Sometimes if the piece has been well cared for, the makers

Example of the Howard & Sons label below the seat base, a long side the makers stamp to the castor of an antique chair.

label will still be present underneath the seat base.

The Howard design has been widely reproduced in recent years by furniture companies, and continues to inspire designers and manufacturers a like, bringing a touch of Victorian style elegance in to the modern home. A side from current antique reproductions, original copies of the Howard & Sons arm chair do still exist today and can be obtained for as little as £100. Due to the original chairs not being produced in great quantity, genuine Howard chairs are very rare and don’t often come on to the public market, making them highly sort after. An original arm chair with its upholstery can often fetch a minimum of £1,500 at auction. 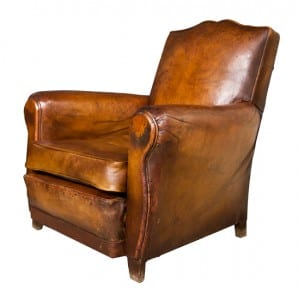 By the Edwardian period, antique chair design had somewhat simplified, as there was now a need for more practical every day chairs in the home. This spawned such designs as the simple tub chair, fireside chair, and smokers elbow chair. All very popular designs of their time, however these styles haven’t remained iconic, and have been rarely reproduced, with the exception of the tub chair, although this has been heavily adapted for the modern age. Despite this, a chair which emerged from France towards the end of the period remains highly popular today, this being the ‘Club Chair’. Unlike English chair design of the Edwardian era, the French club chair was fully upholstered, and had a raised seating position with sprung base, making it more ergonomic, and therefore more comfortable. 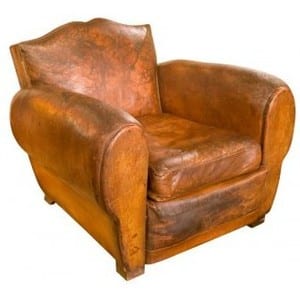 An antique club chair from the 1930s. Note that as a later example it is much more curvaceous than the other example shown.

The Club chair was first noted as being manufactured in France circa 1910, although the style is commonly referred to as being Art Deco, due to its height of popularity during the Deco era. The French often upholstered the club chair in typically Brown or Tan Leather, giving it a luxurious aesthetic. The design made its way across the channel, with the Edwardian’s adapting it to their own tastes, instead upholstering it in a fabric material. The design is easily identified by rounded or curved arms, a curved back rest and shallow bun or block feet. As time went on, the original design was slightly altered to stay on trend. During the 1930s at the height of the Art Deco period, the club chair featured more exaggerated curves, a typical design feature of the time.

Much like the Howard arm chair, the club chair has heavily influenced furniture design today, and reproductions can often be found starting at just £100 for a simple single chair. Original examples are also not as hard to come across as other antique chairs, due to 20th century production rates. However, due to their popularity today, a good example with original leather will usually fetch a minimum of around £400-£500 at auction, let alone retail.

I hope all three of these articles on iconic antique chair design have given you an insight into what was popular through the ages, and how these styles had an impact on our furniture today. Although these chairs haven’t really carried through to the 21st Century, other notable mentions include: The Regency period elbow chair, The Victorian revolving office chair, The Victorian / Edwardian low Tub chair, and The Edwardian Fireside chair, all of which were popular in their respected periods.