Following on from my previous post about notable antique chair designs over the centuries, I will now move on to cover iconic designs from the Georgian and Victorian periods of the Mid 18th and 19th century, and how they evolved from past styles of antique chair.

The wing back arm chair is a design still commonly produced today and traditionally upholstered in Leather or fabric. However, this design actually originated in the Queen Anne period (1702-1714) and was being produced in adapted styles throughout the Georgian periods of the mid 18th to early 19th century. Although produced continually for over a century, the style was most prominent in the George III period (1760-1820) as this design is commonly reflected in today’s reproductions. 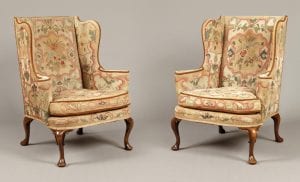 The wing back armchair was initially produced by adapting existing styles of chair to include ‘wings’ to the sides of the seat back in order to prevent feeling a draft when sitting in them. Early Queen Anne examples were carved in Walnut or Stained Beech with the later Georgian designs being produced in Mahogany. Early wing back armchairs can be identified with highly carved decorative knees and a series of carved stretchers to the base, something common among Queen Anne, George I and George II pieces.  The George III armchairs didn’t always feature stretchers to the base and often had simple block legs with more delicate curves to the arms and seat back. In comparison, earlier antique wing back armchairs had very pronounced shaped backs with protruding out swept arm rests. All original wing back chairs would have been upholstered, most likely in simple fabric, although the more grand of designs would have featured needle work patterns. 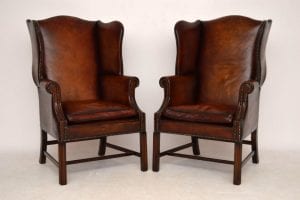 A pair of antique reproduction George III style armchairs. Note they are more plain in shape compared to earlier styles and are upholstered in Leather.

As mentioned before, the antique reproduction wing back arm chair today remains highly popular. This is not down to its original draft excluding capabilities, but for its grand and luxurious aesthetics.  Reproductions have been made throughout the 20th and 21st century and are often finished in buttoned leather to achieve the highest luxury feel. 18th century examples are rare and will often retail in the four figure price bracket, although reproduction pieces are priced to suit all budgets, with basic examples starting at under £100.

Although originating from around 1710, the Windsor chair became prominent from around 1725 to 1860 when the style was at the height of its popularity. The Victorians later deemed the design to be dated, but despite this the antique Windsor chair enjoyed successful revivals throughout the 20th Century, particularly with English furniture maker Ercol, and is still being produced in smaller numbers today. 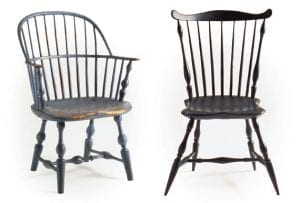 Examples of original 18th Century antique Windsor chairs. To the left is the typical hoop back armchair alongside a Windsor side chair with carved pelmet.

Called the ‘Windsor’ simply due to deriving from the Berkshire Town it shares its name with, the chair was first thought to be produced around 1710. The design is typically characterised by its long spindled back rest and curved sides, traditionally having a hoop shaped back and raised upon splayed legs with a ‘H’ stretcher. There are several variations of the Windsor chair, with most pieces featuring arms, but some as side chairs without arms, rocking chairs or even settees in the 20th Century. Aside from the traditional hooped back, the Windsor chair can also have a simple shaped pelmet, adorned with simple decorative carvings. It is well known that the typical Windsor design does not feature an element of upholstery, something which the reproductions stay true to the early examples. 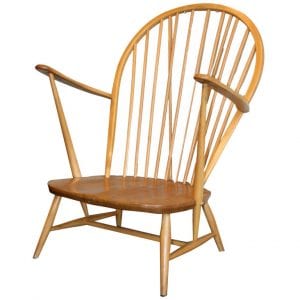 Example of an antique reproduction Ercol Windsor armchair produced in Elm, dating from around the mid 20th Century.

The Windsor chair was typically produced using a combination of woods, as various sections only suited certain materials. The pre 20th century antique examples used a mixture of ash, pine, maple, oak and hickory. Pine and Oak being hardwearing and typically used for the seat base, along with ash for the turned spindles and hickory or maple being steam bent to form the curved top. Later antique reproductions tend to use one material throughout, often being Elm, Birch or Pine. This is due to advances in machinery and tooling. What has made the Windsor design so popular is its simplicity and elegance. The chair represents traditional grace, and gives off a handcrafted feel, which has led the style to be extremely popular in a rustic country setting. Modern antique reproductions of the Windsor chair can easily be obtained for well under £100, however the older the chair the higher in price it will often be, as like most pieces, early examples become rarer. Early 18th century painted Windsor chairs, with the original paint have been known in the past to fetch up to five figure sums.

Although not as widely produced as the previous chairs mentioned, the Gainsborough Armchair is still an iconic design dating from the reign of George II (1727-1760) and George III, which was later reproduced in the 20th century, and is also manufactured in the antique style today, albeit in much smaller numbers than other notable designs. 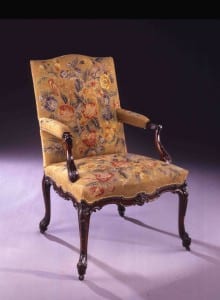 Example of an original George II antique Gainsborough chair. Note that this style does not feature a stretcher and has typically carved arms and legs, influenced by the French taste.

The Gainsborough chair was first introduced during the reign of George II, as the French Louis XV taste had made its way across the channel by this time, and became very popular in England amongst craftsmen and architects. This French influence inspired never before seen shapes and carvings among furniture makers, such as fully upholstered seat backs, scrolling arms and foliate details. It was these new contrasting styles that inspired English furniture makers to produce their own style of ‘French Chair’, being coined simply the ‘Gainsborough Chair’. Much like the French influence, it was a wider set style of chair, with a short but delicately shaped back, open sides and concaved scrolling arm supports. The main differences to that of a George II and George III Gainsborough chair is that the Louis XV manor is more apparent in the George II designs as these chairs feature heavily carved decoration and are commonly raised upon long carved cabriole legs. The later chairs on the other hand are more simplified, and have typically Georgian characteristic, and it’s this later style that is still commonly seen today. 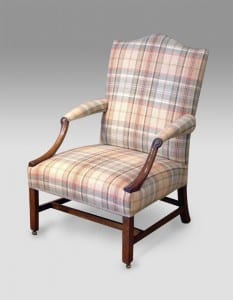 A George III Gainsborough armchair. Note that it is much simpler in style to that of the earlier design.

There are comparisons drawn between this style and that of the Wingback Chair, in so far that both were often upholstered in Leather or fabric, with the George III Gainsborough design also being raised upon simple block feet with a ‘H’ stretcher underneath. The Antique Gainsborough chair was commonly produced in Mahogany, although todays reproductions can also be found in Yew, Walnut or Beech, with some examples being manufactured as revolving desk chairs also. Much like the previous styles, it is hard to find original 18th century Gainsborough chairs, with examples fetching upwards of several thousand pounds for a single armchair. Good quality reproductions are also highly sort achieving similar figures for a pair. This is mainly due to the fact they are produced in limited quantity, which keeps the design highly sort after today.

Now that iconic designs of Antique Chair have been covered from the 17th and 18th century, I will move on to discuss chairs from the Victorian, Edwardian and early 20th century in my next blog post. I hope this second article has enlightened you about the more recognised antique styles from the past, and maybe you would like to own or even already own one yourself, in either case I hope this has provided you with some useful tips and information.