The famous Chrysler Building in New York City, built 1928-1930 at the height of the Art Deco era. Note the linear lines and stepped design, typical of this period.

Art Deco was an extremely lavish era in design history, due to a huge economic and industrial growth across American and Central Europe, Cars, Electricity, Motion picture and the Telephone were all becoming more readily available. The French famously called this period ‘Annees Folles’ translating to the ‘Crazy Years’. Because of this vast gain of wealth, the era really championed using the highest quality materials and cutting edge designs when it came to furniture. The style is often identified by very long linear lines mixed gentle sloping curves, something which was not only typical in furniture, but Automobiles, Transport, Architecture and Visual design. 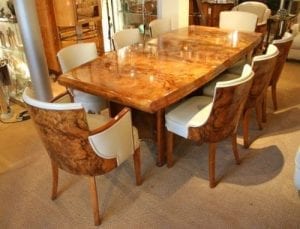 A grand example of an Art Deco Dining Table and matching dining chairs from the 1930s. The table and chairs are typically finished in high quality figured Walnut veneers.

The Art Deco period is typically in the years of the 1920s and 1930s, and takes its name from the 1925 Paris exhibition. This was the beginning of the first truly modern style after the Edwardian period (1901-1910). It was a whole new style with bright colours being used to enhance visual and 3D designs. The woods typically used for furniture making would generally have been Walnut, Oak, Maple and Rosewood. Furniture would also be inlaid with Birch, Maple, Satinwood and Sycamore, giving pieces a vibrant contrast from the base material. Popular types of furniture from the Art Deco period include Console and Hall tables, Display Cabinets, Sideboards, Dining Room Tables and sets, and Bedroom furniture, most notably Dressing tables and Bedside Cabinets / Chests. 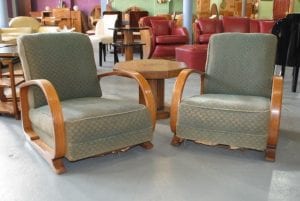 A pair of Art Deco ‘Easy’ Arm Chairs produced by Heal & Son. The sweeping Arm design made this style of chair iconic today.

The movement was widely used across the USA and Europe, most notably France, Germany, The Netherlands and Scandinavia. In Britain many known designers of the time, started using more exotic woods and lavish inlays to replicate the shift in trends across mainland Europe. Production numbers of Art Deco pieces were typically kept to small quantities and often produced by small manufacturers. However, several companies did rise to be market leaders during this period with more noted manufactures’ being Gordon Russell of Broadway and Heal & Son of London, both of which promoted the latest in modern design. Russell’s often used extravagant veneers such as Walnut and Maple in their furniture to create a feel of luxury. They aimed their furniture at the higher classes, promoting the ethos of ‘Hand Made’ with popular pieces including Sideboards and Dining table sets. Heals on the other hand, marketed their furniture for everyone, producing furniture in larger quantities with more minimal designs using Oak, which gave them a wider product range, including Arm and Easy chairs, Bookshelves and Cabinets. 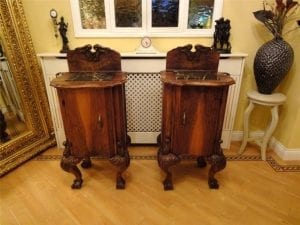 An example of French Art Deco bedside cabinets. Note the use of Walnut and Marble to provide a grand finish.

In Europe, most notably in France, furniture was often designed to be as grand as possible with finest quality veneers and elaborate designs being used. They also mixed Neoclassical design together with Art Deco to produce truly unique pieces. For example, Bedside Cabinets would be finished in figured Walnut, but have an inset piece of Marble sunk in to the top surface and be raised upon highly carved classical feet. Germany also had its own interpretation of Art Deco design with their ‘Biedermeier’ style, the original era being that of the early to mid 19th Century (1815-1848). However, the Biedermeier style was renewed during the Art Deco period, with furniture often being finished in Maple and having an element of ebonised wood to contrast this. This style was also very expensive and extravagant, and replicated classical pieces of furniture such as Secreteire Chests and Scroll End Sofas. This quality and attention to detail meant that furniture from this period in Europe was never produced in large numbers and makes original pieces very scarce in today’s market.

End of an Era

Sadly, the end of this grand era came to a close with the imminent outbreak of World War II, with designs put on hold and materials and funds being driven towards the war effort, this all amounted to the end of the Art Deco period. This also coincided with the Wall Street crash in America, which led to the great depression. With the huge financial struggles that these events created, furniture design thereafter headed in a different direction, adopting more modular simple designs for use in all homes.

Although original Art Deco furniture can be hard to come by, many reproductions were produced during the 1960s and 1980s. Staying true to its roots these examples used the typical Walnut and Maple Veneers but also featured Rosewood heavily, as it was more readily available by this time.

Above is examples of Art Deco style Bedside Cabinets, A Console / Hall table and Occasional Tables, produced from the mid to late 20th Century. Note the use of slightly different woods, such as light Walnut and Birdseye Maple. Deco style furniture is typically finished with a glossy lacquer to enhance appearance and is a little more over the top with shape and form compared to the original furniture.

By paying homage to the original Art Deco designs, it keeps the period popular today and makes the style more affordable for all budgets. Because of this iconic era many visual and 3D designers still use Art Deco styling for inspiration in current modern day design. Look out for very linear lines and details, overly stylised decoration and sweeping curves on armrests or table legs, all of which originated from this fantastic period in design history.